In the wake of declining new confirmed virus cases, many states are moving to phased reopenings of local economies. This is a key moment to prove that economic activity can occur while also limiting the spread of the virus through less intense mitigation efforts. The country faces a public health and 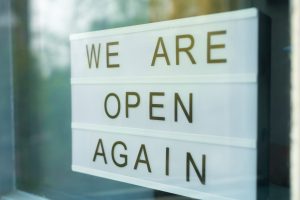 economic crisis, and the economic challenge can only be engaged by allowing businesses to operate again.

A sign of the ongoing economic crisis came in the form of three million more jobless claims this week, pushing the eight-week total to a staggering 36.5 million job losses. However, continuing claims stabilized at just under 23 million, indicating a slowdown in the growth of unemployment. The May jobless rate will be at least 15%.

Recent stock market gains reveal a sharp difference between Wall Street and Main Street in terms of ongoing economic prospects. While stock prices have staged a generally encouraging rebound, retail sales in April were down 16%, more than the 12% consensus forecast. This contrast is in part a reflection of expected differences in future market share, with larger firms expected to gain at the expense of their smaller rivals.

This is due to differences in balance sheets and the availability of credit between large and small businesses. An example of this difference is the tightening of lending for AD&C loans during the first quarter. Lending conditions reached their tightest level since 2011, as financial institutions took a more risk adverse stance due to the current macroeconomic and virus environment.

However, the housing market is offering some possible hints of a future rebound, with mortgage application data posting four weeks of gains. While applications are 10% lower than a year ago, these data match anecdotal evidence indicating that buyer traffic improved in housing markets in recent weeks. Unlike other kinds of economic transactions, a home purchase delayed is often not a home sale lost.  People move for a variety of reasons, including changes in household size and structure. This is important because it implies that housing is a sector that can lead an eventual recovery.

As of the first quarter of 2020, housing's share of GDP was 14.9%. NAHB is forecasting this share to rise in the year ahead, and not just due to improved sales conditions. Due to the lockdowns and changing homeowner preferences, we expect demand for remodeling projects that enable existing homes to incorporate more space for home offices and exercise equipment.

Lastly, the impacts of a sharp recession and aggressive monetary policy have raised some concerns regarding inflation. However, as we have forecasted, the near-term risk for the economy is deflation. In fact, this week's CPI measure of household inflation indicate a decline in overall prices, despite a 1.5% gain for food prices. Additionally, a broad-based measure of residential building material prices found a 4.1% decline in April, with material prices down 5.4% on a year-to-date basis.

Deflation is the greater risk as the economy contracts, and this is proving true now. Over the long run, inflation pressures will certainly rise due to large government deficits and unfunded future entitlement spending; but for the time being the economy continues to suffer from lagging demand.

The Home Builders Association of Kentucky (HBAK) is a voluntary, statewide trade association representing over 5,400 member firms and 25,000 individuals in the housing and building industry throughout the Commonwealth.